Advanced Scripting exposes all the new scripting techniques introduced by recent SQL server client tools components and can be used to automatically generate drop and create scripts in the appropriate dependency order from underlying databases and servers, for all database and server objects.

The Advanced Scripting dialog can be used in two ways:

1. When working on code packages, you can right-click the package node and then select Add SQL Script → From Advanced Scripting. Using this option will allow you to generate SQL scripts using the dialog, and when you are done, the scripts will be automatically placed in the code package in the appropriate dependency order.

2. You can also invoke the Advanced Scripting dialog independently of a code package, to generate one or more scripts for your database objects. To do so, go to Tools → Advanced Scripting. After you select the objects that you wish to script and press OK in the dialog, scripts will be created in the SQL editor. If you select the Export option, scripts will be exported to the local file system.

Script to a Single File (default = false) – when this option is set to true, a single file will be generated for all scripted objects, for all CREATE and DROP statements.

Transaction/Error Handling (default = false) – this option mandates scripting to a single file. When this option is selected, all SQL statements in the script are placed under a single transaction, which in turn provides auto-rollback capabilities when deployed against a target database. In other words, when you set the value of this option to true and place the generated script in a code package (for example), if any errors occur during package deployment, all changes performed in the script will be automatically rolled back by the SQL server. Similarly, if you run the produced script against a single database from the editor, errors that occur during execution will prompt a rollback of all script changes.

Group Drops Before Creates (under the Advanced tab) – when this option is set to true (which is the default), all DROP statements will be grouped together before any CREATE statements, to allow you to run your scripts repeatedly and in the correct order.

Some licenses for Combine have a restriction to the number of simultaneously used servers. The restrictions are agreed at the moment of purchasing a license.

Each server involved when a package of scripts is being performed, appears in Tracked Severs List.

Figure 1: Getting information about license. 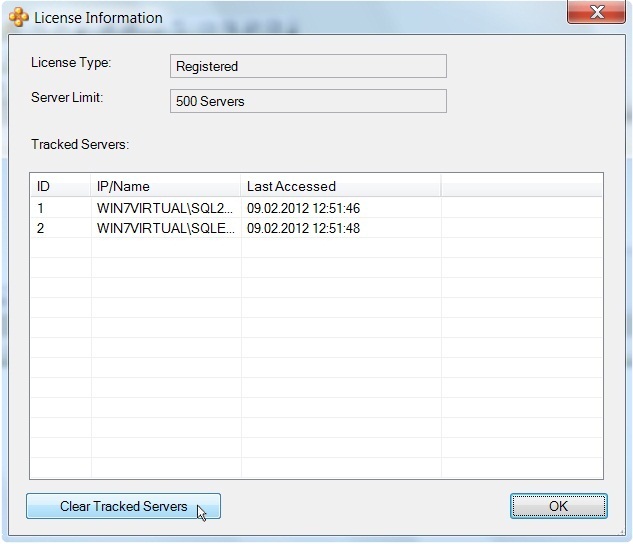 How to Use SQL Help and Online Language Reference

General SQL Help – When you press ALT+F1 (or go to Help → SQL and T-SQL Help), a new default browser window will open and display the main Transact SQL Reference web page. You can then browse and find additional SQL and T-SQL online help by navigating the Books Online (BOL). If you are looking for help regarding specific SQL or T-SQL commands, this can be accomplished easily by using context sensitive help as described below.

Context Sensitive SQL Help – To use the context sensitive SQL help, you must first open a SQL editor window. In the window, enter (or find) the desired SQL command, select and highlight it, and then press ALT+F1 (or go to Help → SQL and T-SQL Help). By doing so, Combine will search this SQL command for MSDN site using “Bing System” and a new default browser window will open with first search result.

For example, please refer to the images below: By selecting the DBCC SHOWCONTIG string and pressing ALT+F1, Combine will open a new Internet Explorer window with help for the requested T-SQL command.

1. If the requested command cannot be found, after you press ALT+F1 you will be redirected to the main MSDN search page.

Combine version 6.2 and below

Combine version 6.3 and above

But if the corresponding local Combine data folder already exists then no upgrade conversion occurs.

There are several examples below.

1. An end user makes a fresh install of Combine 6.3. In that case there are no existing configuration files. The JNetDirect Combine just creates “JNetDirect\Combine\6.3\” configuration folder and fills it with an empty default configuration.